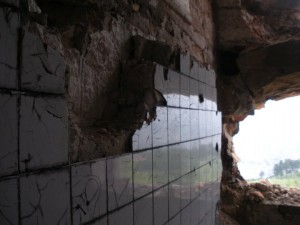 Rubble and debris crunch under my feet as I step over the remnants of a three-year war. Looking out through a windowless frame of the ruined Dom Policije Vranjače (Police House originally used as a vacation home for police officers and later as a vantage point for intruding Serbian forces), I can feel the weight of a thick fog lingering above the city. From here, atop the Trebević Mountain that still houses the 1984 Winter Olympics Bobsleigh track, I stand where the Serbian snipers of the Siege once stood when they moved to capture Sarajevo. Bullet casings still litter the floor of this famous stronghold. Originally anticipated as a quick capture during the Bosnian War, the Sarajevo Siege lasted instead from 1992 to 1995 and resulted in nearly 10,000 casualties, many of whom were civilians.

Alongside me is Skender, a passionate Sarajevan who spent nearly four years of his childhood growing up in a war-torn Sarajevo and who has now taken it upon himself to educate travelers from around the globe about his hometown and its history through his Sarajevo Funky Tours. Local guided tours are far from light fare. They give an honest telling of the devastation felt by a nation’s people and breathe truth into the historic numbers and statistics. Skender’s knowledgeable demeanor and first-hand account of the Siege makes for a gripping roller coaster ride through the most recent tug-of-war in Balkan history. 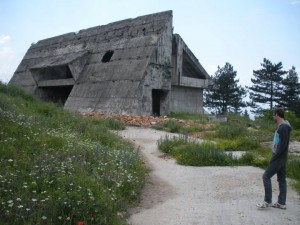 Before exploring the standing ruins of Trebević, we were led by Skender to the Tunnel of Hope: a symbol of the bravery, valour, and the reluctance of the Sarajevan people to succumb to invasion. Nearly completely surrounded by invading Serbian forces in 1993, and without food, fuel and electricity, the Sarajevan people built the Tunnel of Hope which stretched 3,150 feet under the United Nations neutral airport to the Bosnian controlled Mt. Igman, where they were then able to collect supplies and bring them back into the besieged city. Today, 66 feet of tunnel have been recovered and the tunnel’s original entrance has been transformed into a Historical Museum. With or without a guide, you can visit the War Tunnel and Museum in Sarajevo which is open 9 a.m. – 4 p.m. daily.

From there we were led by Skender down Sniper Alley, a boulevard flanked by high-rise buildings, making it the city’s prime target for snipers during the Siege. Our last stop was the exploration of Trebević Mountain, where the advantage of surrounding Serbian forces was clearly evident.

For a 25 percent discount on Sarajevo’s Funky Tour and a relaxed and homey stay, book your nights’ accommodation with Hostel Posillipo, located in Baščaršija, the oldest and most historically rich part of the city. 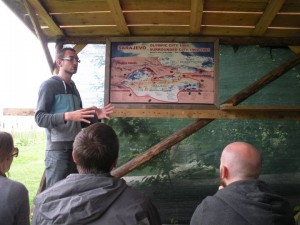 As you walk through Sarajevo’s vibrant old town nowadays, you’d be hard pressed to find evidence of the Siege. Ruined buildings have been reconstructed and the cobbled streets and lanes bustle with Ćevapi vendors, lively cafes and trendy night clubs (like, for instance, The Basement — on Wednesday nights, ladies drink for free). From the Baščaršija Mosque to the Sebilj Fountain, the Old Town flourishes. Even the Sarajevo Roses, indents in the concrete made by mortar shells and then filled in with red resin, have become faint as the years pass.

Today’s Bosnia and Herzegovina is a potpourri of culture and religion. Sarajevans no longer live in fear, but instead prosper as a growing community. The streets thrive with up-and-coming businesses and flocking tourists and the hills that surround this flourishing city sing with lush vegetation. The Siege of Sarajevo to this day lives on, not only in the memories of its survivors, but in the hearts of literary texts, such as The Cellist of Sarajevo by Steven Galloway and a documentary entitled Miss Sarajevo by an American named Bill Carter. Seek these out for any more information you have on the modern Sarajevo; its history will never be forgotten just as the spirit of its people can never be broken.