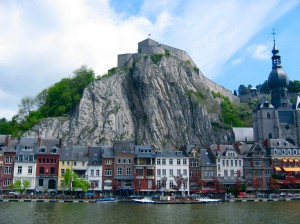 In a tranquil Belgian town, some 75km south-east of Brussels, set in a landscape of quilted willow green and sage and threaded with a broad aquamarine coloured river, lies historic Dinant, famed for being the birthplace of Adolphe Sax, the inventor of the saxophone. Dinant is a pretty little town slung along the river Meuse beneath craggy green cliffs in the centre of the Meuse Valley, about 30km south of Namur – a handy base for venturing into the surrounding countryside either by boat, bike or on foot.

Dinant is dominated by its two main buildings: the Citadel, which has been frowning over the town since the 11th century, is perched on a hundred metre high cliff; and the Cathedral of Notre Dame, outsized against the surrounding structures and capped by a bronze onion dome. The Cathedral of Notre Dame was built as a Romanesque church at the end of the 12th century but was destroyed by a falling rock, then partially rebuilt in Gothic style. To reach the military fortress take a steep cable car ride (entrance beside the Notre Dame church), or if you’re up for a little physical exercise follow a 420-step staircase leading to the top of the rock. Inside the Citadel is an armaments museum, dioramas and a collapsed shelter cave. Outside there’s a self-service restaurant and a patio area, with somewhere safe for kids to play; plus a hang-glider’s vista over the meandering Meuse River – a fetching landscape, companionably rooted to an ancient past (+32 82 223670 www.citadellededinant.be). The Citadel is open all year – except weekdays in January and Fridays from November to March. Prices are €6.50 for adults and €5.50 for children. 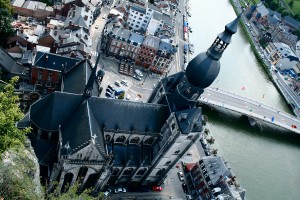 Amble through the narrow riverside town for a while and find sudden pockets of quiet, such as squares with unusual artwork and several truly impressive bakeries. Alternatively, take in a warm drink and a bite to eat at the La Couronne Tavern (Rue Adolphe Sax-1), which is in the centre of Dinant and next to the beautiful Cathedral of Notre Dame, facing the Meuse River. From La Couronne’s patio you can observe motor boats sedately cruising beneath the Charles de Gaulle Bridge (so named as de Gaulle was injured nearby during WWI). During the summer season boat trips along the River Meuse are offered by Bayard Boats, based in the heart of the town. They have several guided tours operating, with a selection ranging between 45-minute to three hour cruises (+32 82 223042 www.dinant-tourisme.com/bateauxbayard/). 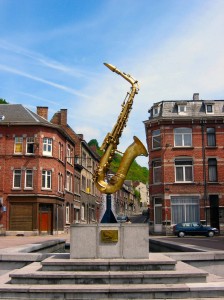 There are several caves in the Dinant area, the most striking being ‘La Merveilleuse’ with magnificent waterfalls and stalactites. The entrance is a few hundred metres from the Dinant Railway station and is open daily from April to November from 11am to 5pm and in July/August till 6pm. Contact +32 82 223042 (www.dinant-tourisme.com/Grotte-La-Merveilleuse).

The 2012 Dinant international jazz festival is scheduled to take place in the beautiful Saint-Norbert Park of the Leffe Abbey (+32 82 222870  www.dinantjazznights.org/program.asp).

Nearby is the castle of Jehay, which was built in the 11th century and has, through the centuries, been home to aristocrats and royalty. It is a magnificent example of medieval Renaissance architecture, surrounded by a moat. Today it is owned by the Province of Liege who has opened it to the public. The castle is full of rare furnishings, silverware collections, antique lace, china, tapestries, books dating back to the 11th century, sculptures and paintings by the masters, and many other precious artefacts. The marvel continues in the gardens, along the paths, arbours and fountains; all along the main alley bordered by cascades and nymphs, delicate works by Count Guy can den Steen. Ten contemporary sculptors take us on an artistic journey full of original works and installations in the woods surrounding. These wood magicians invite us for a stroll in the gardens and parks surrounding the castle of Jehay (between early June and the end of September). 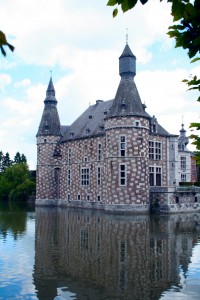