As a tourist to Germany it’s not likely that you will find yourself invited into a local’s house. Germans are famously  reserved at first, but if you keep your eye out for a broomstick over a door, consider it your personal invitation to enter into the house. 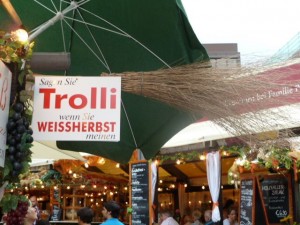 The broomstick represents a besen, the German word for “broomstick”  and is a type of wining and  dining establishment found only in the wine growing regions of the south west state of Baden Württemberg. Enter a besen and you are entering a winegrower’s personal home; most likely sitting in their  living room or dining room, where the furniture has been cleared to make way for tables. You will also be taking part in a tradition that has been around since the year 800, when besens originated under the rule of Karl the Great as a way for winegrowers to serve their wines in their own houses.

When dining at a besen, expect traditional yet simple Swabian food and a limited menu for reasonable prices. Potato soup, sauerkraut, sausages, Spätzle (a type of Swabian pasta)  and Maultaschen (often referred to as Swabian ravioli) are common staples. You’re not likely to leave hungry as Swabian food is very filling. All the food is prepared in a normal sized family kitchen, not a restaurant equipped kitchen, so don’t go to a besen if you’re in a hurry. It can take a while for your food to arrive, but this just gives you more time to soak up the local atmosphere.

Some may say that besens are cramped, but I prefer to think of them as cozy, and this is one of the appeals of a besen to the normally reserved locals (called Swabians). The coziness forces them to mingle, something they wouldn’t be likely do in a typical restaurant. Therefore a besen is a great place to connect with locals since you’ll likely be sitting shoulder to shoulder in a place where small talk is encouraged. Even better is that, while everyone is welcome, the crowd tends to be mostly locals. Besens are also full of surprises. There may even be a local band playing, or an impromptu one that starts playing. It just doesn’t get any more German than hearing traditional German folk music while dining at a traditional besen. 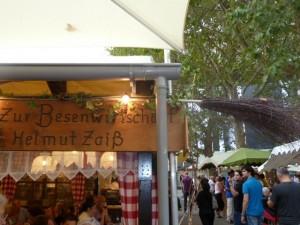 No visit to a besen is complete without sampling the latest vintage, most likely grown by the besen owners themselves. Most wine from the Baden Württemberg region is grown on small vineyards and stays within the region, very little of it is exported internationally. So, this is one of your only chances to sample the local wine. Of special importance is Trollinger, a wine that has been grown in Baden Württemberg since Roman times. Unlike other red wines, that appear burgundy, there’s no mistaking Trolllinger with its bright red color. Baden Württemberg is one of the few places in the world where it’s grown and over 20% of all wines produced in the region are produced from Trollinger grapes. This unique wine is a favorite among  locals who often describe it as “light and fruity” and a besen owner will proudly serve it, while explaining what makes their Trollinger so special. Be warned though, not everyone is a fan of its unique taste. I have heard more than one non-local refer to it as “cherry cough syrup.” Unlike other red wines, Trollinger is served cold. If you only tried one wine while at a besen I would recommend a Trollinger, as it is so famous with the locals and difficult to find elsewhere.

Another thing that makes besens special is that in rule-laden Germany, no permits or licenses are required to open a besen, cutting through all the red tape. Not to worry though: besens are still visited by health inspectors.

Visitng a besen is not as simple as it sounds though. Besens are usually open from October to March, the time between the grape growing and the wine producing, but there are exceptions. Furthermore, besens cannot be open for more than four months a year. Since there are no permits or licences required besens are free to open, or not open, whenever they feel like it and they often do. It’s not uncommon for a besen to not open every year, while others might only be open for two or three weeks of the year. Your best bet of finding a besen is on a Wine Walk, along which besens are featured prominently, encouraging people to come in. And, after strolling through vineyards, it’s an easy sell. Alternatively, you can check with the local tourist office about besens that are open. For a list of besens and their opening times in Stuttgart, the capital city of Baden Württemberg, click here.

Visiting a besen is one of the most local things you can do and something unique to Baden Württemberg. While opening a besen does provide a bit of extra income to the winegrowers,  the real incentive of opening a besen for many of the owners and patrons alike is to keep the 1200+ year tradition alive.