Where the Sea Sings: Zadar, Croatia

The sun still shedding its scorching rays reflects off the emerald water like a thousand dancing stars. Strolling down the seaside promenade, a whistling sound in the distance causes me crane my neck and I strain my ears to better capture the sound. As I near the source, the whistling intensifies into a rolling assembly of harmonious delight. I glance around the Nova Riva, now fully subm 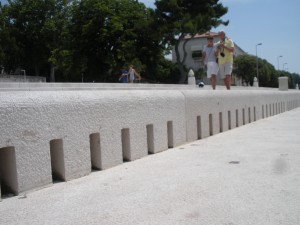 ersed in the low, undulating pull of this tune, and find only lounging bodies strewn across a set of marble steps leading to the water’s edge. The sea continues to slosh up against the shining steps, and with each pulling tide, the music continues to flow, resonating the deep and melodious stylings of the Adriatic.

This is the world’s first Sea Organ. Built in 2005 by Nikola Bašić in Zadar, Croatia, the Sea Organ (Morske Orgulje) has been receiving positive feedback from not only local Dalmatians, but from the international community as well. Since winning the European Prize for Urban Public Space in 2006, this natural musical phenomenon has been attracting tourists from around the globe.

In an attempt to both reconstruct and redesign the city of Zadar’s unsightly concrete seawall after the havoc of WWII, the Sea Organ was built. This architectural feat is seen as one of the city’s most prized monuments and has done its job in reconnecting the people of Dalmatia with the once beloved sea. The marble steps are a pleasant change from the dull concrete slabs that make up Zadar’s seaside promenade and the fluctuating songs of the sea create a unique atmosphere where human ingenuity and natural elements coincide with one another.

But one question stumping all of its listeners is how does it work? Stretching 70m along the Nova Riva, the Sea Organ is comprised of 7 tiered steps complete with a series of whistle holes. Beneath the marble steps lies a sequence of 35 polyethylene tubes cut into various lengths and widths. When the air from the waves is pushed through the underwater resonating chamber and out through whistle holes, a random orchestra of harmonic sounds is created. Like a real organ, the pipes and chords needed much tweaking and tuning. Even under the most severe weather and water conditions, the Sea Organ plays a pleasant tune. This is thanks to the organ’s cord composition and its strategically placed pipes.

Croatia’s always provided a pallet of choice for travelers and vacationers alike and has proudly maintained a strong reputation within the Balkans. Whether it’s history, beach, or architecture you fancy, you’ve come to the right place. Zadar, home to one of the country’s most important ferry ports, is a city built for the Sea. Take a stroll down the seaside promenade for a promising harbour tour, visit the Morska Vrata (Sea Gates), or laze about on one of the city’s many beaches. Embracing both a romantic medieval Old Town and a flourishing modern outlook, the city’s got more than enough to go around.  If nature strikes a chord, visit one of the five national parks that encompass the city.

Or are you more of a history buff? Having prospered under Roman rule since 59 BC, and seen the likes of the Second World War, Zadar has quite the story to tell. You can still enjoy some of Zadar’s beautiful Roman architecture today throughout the city’s Old Town. Make sure to take yourself out on a self-guided walking tour to some of the city’s most beautiful churches including St.Donatus’ Church, built in the 9th century, or St.Mary’s Church which sits directly opposite it.

But when vacationing becomes more a to-do list than a much needed break, slow down. Spend an evening watching the sun set, and do what the Dalmatians do, and just sit and listen to the music of the sea.