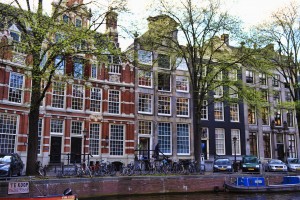 Amsterdam is the greatest small city in the world. It overflows with character, 17th century merchant houses and distinctive canals who themselves are listed as a World Heritage.

It’s impossible to escape the city’s history, like that of the quietly elegant De L’Europe, built in the 1800s on the banks of the Amstel River in the heart of Amsterdam’s canal area. Owned by Heineken International, who recently gave it a $83-million facelift, De L’Europe is truly a refined establishment best suited to discerning travellers. Its central location to the old city 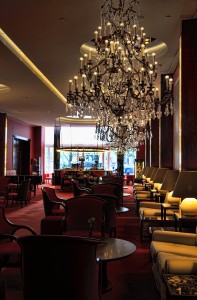 makes it walkable to almost everywhere you want to go – including the floating flower market just 100m further along the river.

After removing my luggage from the boot and transferring it to the hotel’s lobby, the doorman – with his jaunty top hat, valet parked my car (extra charge). As the hotel is surrounded by canals parking space is scarce.

De L’Europe lobby oozes refinement, in the most dulcet of tones. It’s chic in a sumptuous fuchsia pink, made effervescent by the afternoon light reflecting off numerous crystal chandeliers. The elongated lounge, adorned with oversized replicas of Dutch Masters from the Rijks Museum, is bright and spacious with elegant period furnishing. A sophisticated circular gold bar at the far end, near the bay window overlooking the canal, has a pianist and jazz singer performing at teatime. 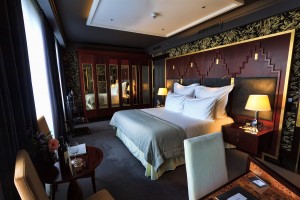 De L’Europe has 111 guest rooms (including a six-bedroom penthouse suite). My deluxe room, with a canal view (extra charge) and meticulously reproduced Dutch Masters on the walls, is spacious and comfortable with a super king size bed dressed in crisp white linens and the largest pillows I’ve ever seen. There’s a coffee machine, a Bosse sound system, an iPod hook up, an in-room iPad, a Samsung LCD TV and free Wi-Fi. The large marble bathroom has first class toiletries, thick fluffy towels, a huge walk-in rain shower and under-floor heating. In-room motion detection lighting creates subtle guidance in the dark. 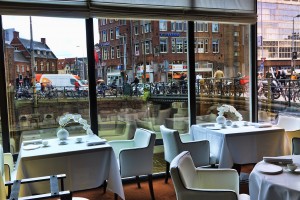 bustling city coming to life. Their spinach, mushroom and cheese omelette is superb.

The hotel has several dining options: The Hoofdstad Brasserie (where breakfast is served) conjures up Amsterdam-accented food and is super value at €35 for a three-course meal. The cherry picked wine-by-the-glass list is extensive and ranges in price from €5 to €11. The Promenade is the place to be seen and serves wine by the glass, great cocktails and fabulous afternoon tea. Het Terras is for chic open-air riverside dining, and their gourmet restaurant, Bord’eau, is the jewel in L’Europe’s culinary crown. I chose to grab a sandwich in Freddy’s (so named after the founder of Heineken Breweries – 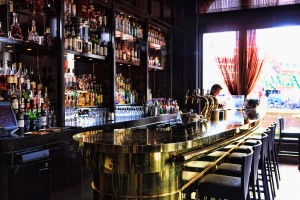 Freddy Heineken, who did most of his entertaining here) – the watering hole for the local elite. Freddy’s is touted as one of Amsterdam’s best bars. With its jazz pianist, wood panelling, club-ish atmosphere and lavish furnishings it’s no wonder. They reportedly make the best Bloody Marys in all of Holland – my drink of choice though is Lemon Pie’tini.

For all its opulence and grandness, it’s the staff that make De L’Europe a truly six star experience. From the concierge, to the valet, the barman and housekeeping – nothing’s too much trouble, not even for hotel management who regularly appear in the lobby.

As a member of the ‘Leading Hotels of the World’ label, in a city that was once the richest in the world, it’s not expensive. In fact, for what you get, it’s a bit of a steal.