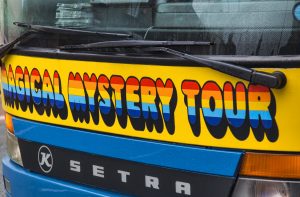 “Liverpool is the place that changed the face of music forever”, said our Magical Mystery Tours guide, Jay, who promised to take us on a nostalgic journey to where The Beatles found fame.

I’m a little sniffy when it comes to cheesy guided tours, thus with some apprehension I boarded the tour bus at the Albert Dock. Immediately a drum beat signified the start of the 2-hour tour and the ‘Magical mystery tour’ boomed through the speakers, which got everyone on board in the right frame of mind. The tour is well thought out and gives a fantastic insight to the background of The Beatles. The guide, Jay, with his personal connection to the band, is a mine of information and takes you to the areas where each of the Fab Four spent their childhood, as well as other notable places you hear about in their songs. 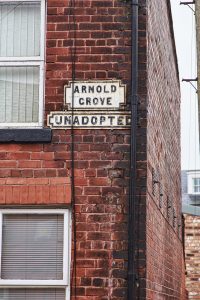 We drove past Ringo Starr’s childhood home at 9 Madryn Street, then to 10 Admiral Grove (the pink house) with The Empress pub on the corner (as depicted on the Sentimental Journey album cover). The St Silas Primary School, behind its blue railings was pointed out – this is where Starr went to school. Then onto Penny Lane, one of the most famous streets in the world, here George Harrison would play in Sefton Park as a lad. Half a mile along, we pass the Liverpool College which Brian Epstein attended. People and places mentioned in ‘Penny Lane’ are pointed out – the bus terminus, the bank, St Barnabas church, Tony Slavin’s barber shop.

In the suburb of Wavertree at 9 Newcastle Road, close to Penny Lane, is where John Lennon lived as a child. Then it was onto 12 Arnold Grove where George Harrison lived (his street name also doubled as his pseudonym when making hotel reservations). At 197 Queen’s Drive, a white detached family home, is where the Epstein’s lived. 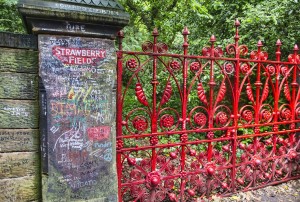 Then it’s onto Woolton, a leafy suburb and Holy Grail of The Beatles trail. Here, at St Peter’s Church, is where it all started. On 6 July 1957, 15-year old Paul McCartney met and tuned John Lennon’s guitar on the steps of the church hall. McCartney’ home at 20 Forthlin Rd has a wooden painted sign on the garden wall indicating that he lived there.

As a youngster John Lennon would sit in the tree at his Aunt Mimi’s house, watching the girls at Strawberry Fields – the neighbouring Salvation Army children’s home. Aunt Mimi would say that if he was caught they’ll hang him; hence the lyrics ‘Strawberry Fields, nothing to get hung about’.

We passed the cemetery where George Toogood Smith (husband of Aunt Mimi) and Eleanor Rigby lie. Lennon’s second childhood home at 251 Menlove Avenue has been immortalised with a blue English Heritage plaque fixed to the wall: ‘1945-1963 – John Lennon lived here for 18 years.’ Lennon’s Aunt Mimi wasn’t convinced about his career choice and was known to rebuke him: ‘It’s all well and good John, but you’re never going to make any money out of it.’ The song playing after we left Lennon’s home brought it all to life and had me feeling quite chocked up.

According to the Guinness book of World Records, the city of Liverpool holds the most number one hits on the music charts than other city in the world.

Now, driving through the city centre, Jay spoke of 11-year old Paul McCartney who auditioned for the Liverpool Cathedral choir but was turned down. The former choirmaster, Ronald Woan, later joked that he’d done McCartney a favour and probably helped him achieve his dreams.

On Mount Street we passed the art college Lennon attended. Now it’s the Liverpool Institute of Performing Arts, a university music school where every July Sir Paul McCartney personally hands diplomas to graduates. There was some tongue-in-cheek remark about the Catholic Cathedral bells being named after the four most famous citizens of the city – John, Paul, George and Ringo. We drove down Lime Street, referred to in Maggie May, went past St George’s Hall (one of the finest neo-classic buildings in Europe), where Ringo Starr played on the roof and past the Empire Theatre which showed the first screening of ‘A Hard Day’s Night’ in December 1965. 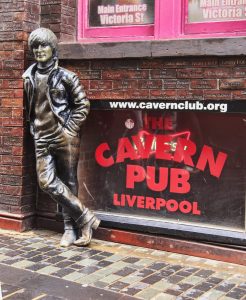 There are a several stops along the way where we were able to leave the coach and take photos. The guide points out all The Beatles sights and provides a personal insight into the band – information not found in a guide book, all whilst listening to relevant music tracks linked to the story being told.

The tour ends on a high at the Cavern Club – the most famous nightclub in the world and where The Beatles played on 292 occasions.

If you are in Liverpool, you must take this tour. Just go, don’t even think about it. And if you’re not into The Beatles, you soon will be!

The International Beatleweek is happening 26 August to 1 September 2015. For seven straight days and nights the city will echo to the sound of its four most famous sons. There are parties, concerts, gigs, theatre shows, guest speakers, art exhibitions, tours, auctions, flea markets, film shows, lectures and typically Beatles tribute bands from more than twenty countries that will provide the music backdrop to it all. Package deals start from £97.50 – see www.cavernclub.org for details.