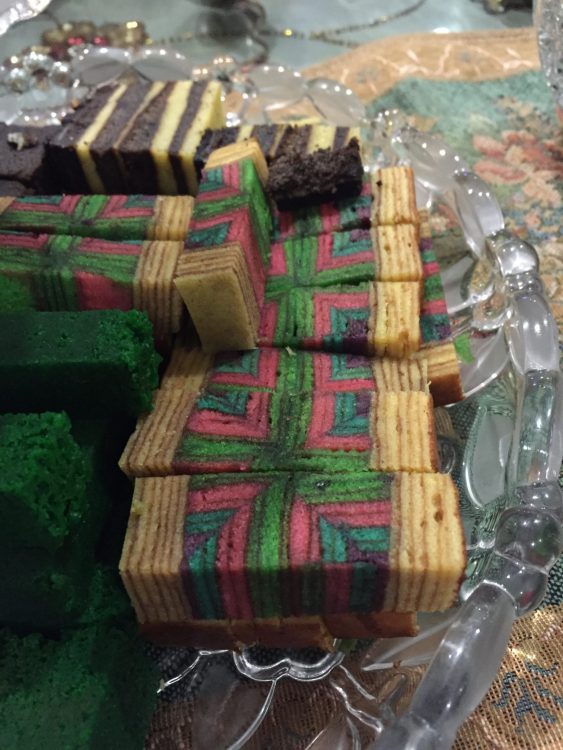 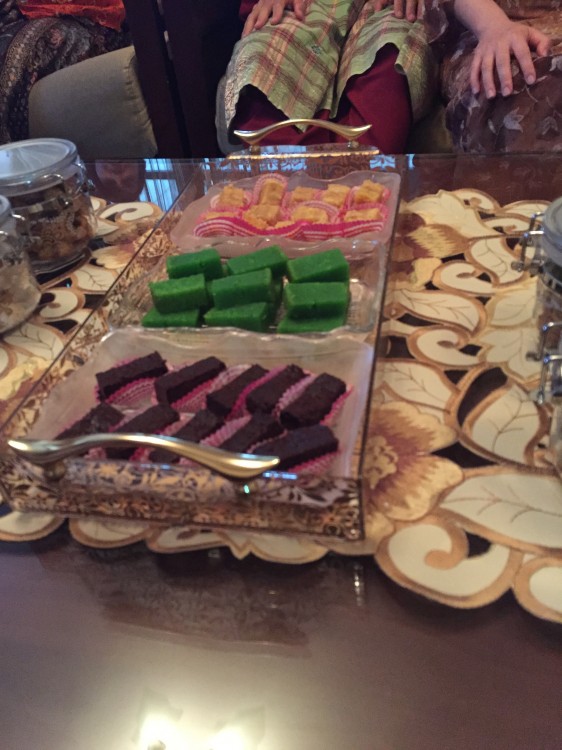 While traveling in Asia this last summer, my wife and I had the unique opportunity to visit Malaysia and to celebrate the end of the Islamic holy month of Ramadan with Dayang, a Malaysian friend of ours. The fast-breaking festival, known as “Eid al-Fitr” in other parts of the Islamic world, is called “Hari Raya Eidal-fitri” (literally: day of celebrating Eid al-Fitr), or simply “Raya”, in Malaysia. During the month of Ramadan, practicing Muslims around the world observe a dawn to dusk fast that requires abstinence from all food, drink, cigarettes, and sex as long as the sun is above the horizon.

So it was then, that on the last day of that holy month, I found myself sitting on an Air Asia X flight transporting my wife and I from the capital city of Kuala Lumpur (in penisular Malaysia) to Kuching in the Malaysian state of Sarawak (on the island of Borneo). Even in the waning minutes of Ramadan, I witnessed Muslim families exhibiting considerable religious self-restraint in their commitment to the fast.  As piping-hot, aluminum-clad airline meals were quickly served after we reached cruising altitude in the less than 2 hour flight between the cities,  I raised my window shade to reveal a sky so deep blue it might as well have been called night. My wife and I had chosen not to purchase a meal on this relatively short flight and had, in fact, consumed a lunch and a small snack before boarding the plane, but still my stomach began to rumble with hunger within a few minutes of the other passengers’ food being served. Yet, the observant Muslim families in our immediate vicinity weren’t eating, even though other passengers around them were digging in. Finally, the flight attendant announced that the sun had set and fast could be officially broken. A happy cry went up from several seats around the plane, because that announcement meant the feasting could begin in earnest, and it wasn’t just going to be on airplane food.

In general, the holiday is something akin to a homecoming. Malaysians from all over the country travel to their family home to celebrate the festival which actually lasts for about a week. Most families provide a public open house for most of that week,  receiving and serving guests from mid-morning well into evening, unless, of course, they are out being a guest in someone else’s home. Our friend, Dayang, had recently traveled from Kuala Lumpur, where she works and lives, to celebrate and assist her widowed mother with the open house. 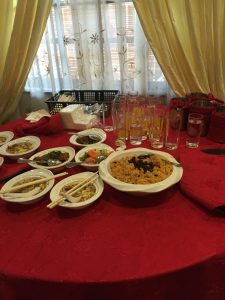 Once home, in addition to helping with preparations in the family home, there is an expectation that adult Malays will visit (if logistically possible) most, if not all, of their elder relatives on the first or second day, and then over the course of the rest of the week, visit the homes of adult siblings, cousins, friends, and neighbors.On the first day of the festival savory dishes are served all day, as are chilled drinks and specialty snacks and sweets. In the following days after the savory mains are all consumed, each visit will still consist of, at minimum, snacks like mixed nuts and candies, sodas, and a variety of layer cakes. Like I said, it’s a feast!

We arrived in Kuching after the setting sun on July 16. Dayang met us and our two other companion travelers (friends of my wife from Hong Kong and Taiwan) at the airport and took us to get dinner at a nearby shopping mall. Though not immediately the Malaysian cuisine I was expecting upon our arrival, a cultural truth was revealed to me in an unexpected way; the Kenny Rogers Roasters (KRR) mere existence suggested to me a Malaysian cuisinal love for chicken – in all its forms! The chain is probably better known in the US because of the TV show “Seinfeld” than its actually physical presence. The company website reveals that KRR’s stateside-presence is encapsulated in a single Ontario, California mall, whereas there are two in Kuching, Malaysia alone, not to mention many, many others across Malaysia and SE Asia.

After eating, Dayang said we had to find a new chef’s knife for food preparation for the celebration; specifically, for cutting cake. She explained that the knife had to be just right (thin-bladed, non-serrated, and sturdy) to cut the cake perfectly. In Malaysia, layer cake (kek lepis) features prominently in the Eid al-Fitr celebratory tradition. The cakes, themselves, are visually arresting, consisting of a variety of vibrant colors and geometric designs, seeming at times more art than food.Yet, food it is! The dense, flavorful, and moist cakes were served at nearly every single household we visited.

However, instead of the wedge or square-shaped pieces that we are accustomed to seeing at celebrations in the U.S., the kek lapis is thinly sliced to be served in pieces that are only slightly larger than a pack of Wrigley’s gum. My father has a saying to describe things that have been so conservatively

parsed, declaring them to have been “sliced so thin, the relatives won’t come back.” However, our host explained that slicing the cake this way was not a slight, nor an exercise in frugality, but actually a courtesy to the guests. As I mentioned before, depending on the size of your family, there is potential for a lot of eating in a day, not to mention the rest of the week. It is for this reason that the kindly host slices the cake so thinly.

Dayang did admit that cutting the cake this way does help the cake go further, considering that with an open house there is no way to really anticipate how many people a household will need to feed over the course of a week-long celebration. Still, in addition to preventing visitors from feeling like they need to engage in obligatory over-eating, it also allows them to save face if they take a piece of cake they don’t like or take a piece too much; throwing away one of these small slices is a lot less wasteful or disrespectful to the host.

We guests awoke on the morning of July 17th, following a night occasionally punctuated by bursts of celebratory fireworks, to find the house a’bustle with activity as the last moment preparations were being put into place before the house was opened to the public. Dayang was slicing and plating cake, her youngest brother was arranging fresh flowers in vases in the sitting room, while her older brother was spraying down the front patio where visitors could dine. Her mother and live-in maternal aunt were preparing the savory dishes that they planning to serve to guests that day.  Dayang’s family generously provided all of us with traditional clothing that Malaysians wear when they go visiting on Raya. Malaysian men wear what is called the “baju melayu”, a long-sleeved light-weight cotton/polyester shirt with a short, stiff collar and matching pants. On top of this, men wear a waist-length sarong that is usually intricately designed and folded around the body to rest upon the hips.  While they did not have one available that fit me, many men also wear a dark-colored, narrow, flat-topped hat called a “songkok”. Women typically wear what is called the “baju kurung”, a full-length dress with long sleeves and no collar that tended to be a single color with a patterned design and intricate embroidery on the sleeves and collar. Some women wore headscarves, but that tends to vary based on religious conservatism or experience, marital status, or simply, personal preference. In a tradition that was reminiscent of large family reunions with screen-printed, brightly-colored t-shirts, most immediate families color-coordinate so that the parents and children, male and female, all wear the same base color; whether it be orange or maroon, all the family’s baju melayus and baju kurungs matched.

Appropriately attired, we were ready to embrace the festival. We began at our host’s home enjoying a lunch highlighted by two kinds of curried chicken, beef roasted in a gravy made from pureed raisins, (a particular favorite of mine), and sweet glutinous rice cakes called “ketupat” that are wrapped in woven palm leaves and boiled in coconut milk. This generous spread was offered by Dayang’s family to all who would visit the home that first day of Raya. That of course was in addition to other traditional snacks and sweets and the aforementioned, kek lapis. Having suitably gorged ourselves on sweets and savories, all washed down with chilled orange or sarsaparilla soda, we proceeded to visit the households of elder relatives and acquaintances of our friend. Though a language barrier existed between us and many of the older Malaysians, they all received us warmly into their sitting rooms and plied us with snacks, sweets, and soda until our bellies were about to burst. By the second or third household, we had learned how to shake hands and bow appropriately, showing sincerity and deference to our hosts while imparting the traditional greeting, “Salamat Hari Raya.” This, coupled with what I am sure was a non-speaker’s over-use of the only other Malaysian phrase we were able to master, “terima kasih” (thank you), brought broad smiles to the faces of our temporary hosts. That day we completed the maternal aunt/uncle circuit expected of our friend on the first day of Raya.

In total, we visited six households and likely gained a pound of weight at each stop. But new cultural experiences are very rarely measured in calories, or at least they shouldn’t be. While our experience was facilitated by a personal invitation, the impression I got was that any visitor to Malaysia during Raya would be received warmly. Despite its religious importance, Hari Raya Eidal-fitri is celebrated as public holiday for all Malaysians, regardless of religion. Visitors can expect to experience a festive, welcoming and generous spirit that serves to match the layered richness and vibrancy of the cakes in the center of the table.