Whilst eating my way around the square mile of Soho I got to meet some of its food heroes – the people who create the greatest food in the capital. Like a gin-infused meat pie at The London Gin Club, La Bodega Negra’s modern-day twist on tacos, the Spanish ham at Enrique Tomas, Basque Country ‘aperitifs’ at Pix Bar, Dim Sum tea pairing at Opium – and the ultimate in Italian hot chocolate at Said. 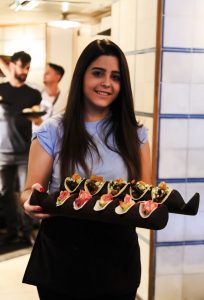 Home to the Mozart, Karl Marx, the Swinging 60s, London’s jazz scene, the rag trade, the theatre, the Sex Pistols and the world’s oldest profession – Soho is as notable for its history and culture as it once was for its sleaze. Since the 80s it has undergone considerable gentrification and is now predominantly a fashionable area of boutiques and media offices. Here chic rubs shoulders with grunge and is where foodies will discover a culinary heaven – a heady mix of Old World preparations, avant-garde ingredients and ethnic flavours – all with a distinctive London spin.

As part of a small group the Twilight Soho food tour walked us through colourful neighbourhoods, quirky lanes and hidden alleys, delivering us to Old Crompton Street and the gourmet tacos of La Bodega Negra – the go-to place for all things Mexican in Soho. The tavern itself is as eclectic as the food, merging trendy Soho with its infamous history, fiery music, raucous food (like chilli slaw and lamb drunk taco – which is sensational) and a ruinous tequila cocktail range. 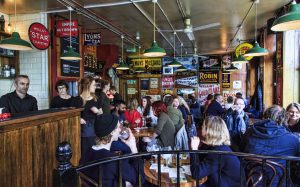 At London Gin Club, on Great Chapel Street, there’s a selection of five gin-infused melt-in-the-mouth pies and a ‘ginspired marshmallow treat for dessert – all washed down with a real English gin and tonic. Owner, Julia Forte, offers a ‘gin club’ tasting menu, which includes one she self-distils and can only be described as robust. Be sure to book a gin tasting sessions in the cellar.

Says Julia: “We serve the best G&Ts in London and offer more than 210 premium gins – from household names to varieties you’ve possibly not heard of.”

On Wardour Street is Enrique Tomas who’s alluring shopfront is hung with Spanish Jamón Ibérico hams, beneath which carvers delicately sculpt off paper-thin slices for waiting patrons. Inside I sampled a few prized ham varietals, some Spanish cheese and of course, a glass of Rioja. What a find! Don’t leave without ordering cured ham in a French Demi baguette – absolutely delicious. 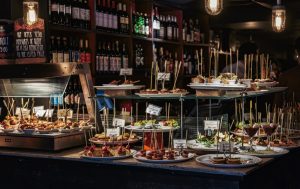 Soho has an immense sense of history about it; nostalgic moments when passing subtly plaqued landmarks like the Sir Paul McCartney’s offices, the former recording studios of Trident Record and 90 Waldorf Street once infamously occupied by the Marque Club – places where mega rock stars first recorded and performed. Then around the corner is Warner Brothers Studios – opposite which Karl Marx once lived.

Still reeling in the flamboyance of the neighbourhood that gave birth to some of the music industry’s biggest legends I arrived at Pix Bar on Bateman Street. Inspired by Barcelona and San Sebastian pintxo bars, Pix does a roaring trade in tiny Basque-style tapas dishes, each skewered with a signature wooden stick and paired with Txakoli wine – but don’t be tempted to overeat!

Proceeding down Frith Street, where Mozart once lived, we entered Chinatown’s Gerrard Street for a further taste-bud adventure – this time in the form of delicious dumplings hidden behind the turquoise doors of Opium. Once we got past the doorman and climbed the four flights of stairs we found incredible decor and silky Dim Sum dumplings filled with everything from crab and samphire to Cantonese BBQ – all paired with a selection of exotic Chinese teas. 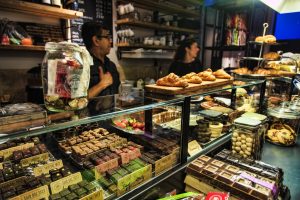 At Said Chocolate Boutique (Broadwick Street) I pulled up an urn and enjoyed the fragrant, gloriously rich and impossibly thick hot chocolate (okay, so I found room for a traditional tiramisu). Inside Said the walls are adorned with silver chocolate moulds of every type and, together with the mood lighting and fireplace (which is lit on cold days), it creates the kind of space you’ll want to spend time in and get to know. The shopfront window displays large glass jars filled with assortments of white, milk and dark chocolate, whilst the display cabinet showcases a range of handmade truffles.

The food tour led me away from the pricey tourist haunts, instead taking me to the cafes, shops and restaurants that are truly shaping Soho’s culinary reputation; and because this tour takes place in the evening, I experienced the true Soho vibe. It’s a unique gastronomic adventure that gave me a taste of London’s most authentically flavoured village. l savoured the fusion between heritage and exotic served in experimental restaurants, and came away knowing a little more of the history that come with the food.