The Mother of All Parties – the Oktoberfest 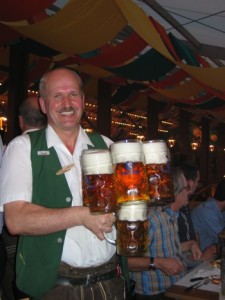 I KNEW I’d had too much to drink when everyone in the room began to look attractive — all 5,000 of them.

That tall, blond Germanic look can quiver my heart even when it’s perfectly sober. Yet perhaps sinking a bottle and a half of wine single-handedly was bordering on the excessive. But what’s a girl to do when the waiter refuses to prance around delivering one pathetic glass of wine at a time because his hands are more useful carrying 12 litres of beer —up twisting stairs, through boisterous crowds, and without spilling a drop. So he plonked a bottle in front of me and told me to yell when it was empty.

Munich’s Oktoberfest is drinking on a mind-numbing, liver-corroding scale. The beer comes in litre measures called a mas, and about 6-million litres are quaffed during the fortnight-long festivities.

I seemed to be sitting with a crowd determined to beat that record. Yet since 6 million visitors were expected, one litre each didn’t sound awfully excessive, I’d suggested. Until our host raised a mischievous eyebrow and pointed out that the attendence figures include an awful lot of children. Clearly the adults do their utmost to drink Munich dry while their offspring enjoy the fun fair.

I had no idea what to expect from the world’s largest drinking spree. Lager louts brawling and throwing up, no doubt. I certainly hadn’t expected such a festive and amiable crowd, nor anything on such a massive scale.

Our party of bewildered but willing foreigners slipped onto wooden benches upstairs in a cavernous, brightly decorated hall. Below us, a live Oompah band was surrounded by thousands of other people lining more benches, which overflowed outside into a field of even more benches. Similar halls stretched out into the distance, among them one monstrous hall big enough to hold 12,000 imbibers. Just imagine the queue for the toilets. 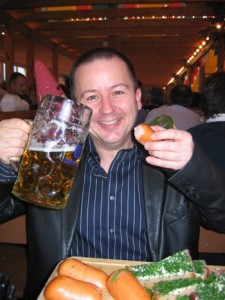 By now, two huge glass steins had been turned upside down on the table to support a board displaying smoked sausages and cheese. Palm-sized pretzels hung from a miniature hat-stand. Then a waiter straight out of the alcoholic version of a Hans Christian Andersen fairytale turned up, bearing daunting flagons of beer. It was only 5pm. Earlier, a taxi driver — who told us that the police typically confiscate about 1,000 licences from drunken drivers during the festivities — advised us to eat before we went. Partly to line our stomachs, and partly because the Oktoberfest is about beer, not food. Baffled by a menu that blended Bavarian with standard German, we all ordered chicken. Each chunk of roast bird sat on its plate in lonely isolation. There was no attempt at a vegetable nor a hint of a salad leaf, in a clear reminder that food is very much an afterthought.

It’s possible to stay sober at the Oktoberfest, if you don’t tip generously. The waiters bring it in as fast as possible and deposit the glasses in front of the nearest raucous group. And with thousands of customers clamouring for beer, skinflints won’t see the waiter again no matter how much they gesticulate.

The Bavarian band encourages speedy consumption with a contract that obliges them to play a certain number of drinking songs every hour. To do the songs justice, people haul each other up to stand on the benches, swaying about and clashing glasses enthusiastically. Drinking is nonstop anyway, but this is drinking to order, with verses like “ein, zwei” and the Bavarian word for drink, which sounded remarkably like “suffer”. Which you can guarantee a lot of people do the next morning. 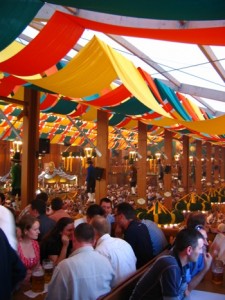 I delayed the inevitable trip to the toilet for as long as possible, but finally had to weave my way downstairs and through wall-to-wall revellers. Every few yards, a loud holler warned that a waiter was about to emerge bearing plates of sausages or litres of beer. That makes the person walking past the doors come to an abrupt stop, with an entertaining domino effect on the people following close behind.

By this time, the band was in full swing and everyone was having a fabulous time. Women voluptuously bursting out of Sound Of Music white-laced bustiers were being wooed by Fritzes in their lederhosen — yes, they really do wear those kinky leather shorts to the beer fest.  Our group had blossomed into loud but linguistically-challenged singers, and our clothes were marked with soggy patches where the clash of glasses had been a little over-enthusiastic.

The Oktoberfest began as a wedding celebration when King Ludwig married Princess Therese in 1810. Munich’s masses were invited to celebrate on the field in front of the city gates, and had so much fun the party lasted 16 days.
Quite how one wedding has justified two centuries of all-day drinking that endures for a fortnight never really gets explained, but with Munich’s breweries, hotels, taxis and shops making more money in those two weeks than at any other time of year, nobody is complaining.

Astonishingly, in spite of the copious consumption of alcohol, I didn’t see anyone heaving up in the corner or swinging a punch. And you have to raise your glass to that. 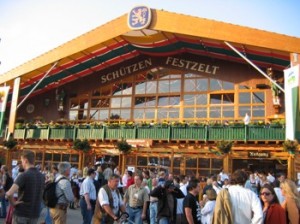 Oktoberfest tips:
The 2011 Oktoberfest will open in Munich from Saturday, September 17  when the Lord Mayor taps the first keg at noon. It lasts until October 3rd.

There is no entry fee, except to reserve a seat. Reservations are only possible for groups of six or more, but each tent has open tables for people without a booking. They fill up fast, although smaller groups should get in if they arrive by 2.30pm on weekdays. On weekends the tents often close by 11am because they are full!

Thursday, Sunday and Monday are less crowded, while Friday and Saturday evenings are hopeless. The doormen are strict, so be polite and sober.  No seat – no beer!

If a package deals charges an entry fee make sure it’s for a reserved seat and comes from a reputable company.
The official website in English is at: www.oktoberfest.de/en

Destinations Europe festivals Germany Holiday Travel planning travel
Previous ArticleVictoria, B.C. in a Day: What to See, What to Do, and Where to Eat.
Next Article Antwerp shopping zones
Lesley Stones