Gunkholing the Islands of British Columbia 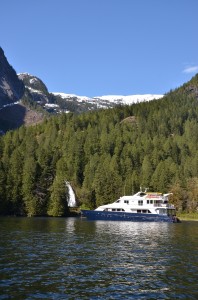 We recently spent a week “gunkholing” around the islands of British Columbia on the Safari Quest yacht with Un-Cruise Adventures. Gunkholing is a boating term that refers to a type of cruising in shallow or shoal water, moving from place to place, and often spending the night in quiet coves. Gunkholers seek out quiet and isolated anchorages instead of crowded marinas. With cabins for 22 passengers and several crew members, the Safari Quest yacht is the perfect size for gunkholing. Superbly comfortable but retaining the ability to cruise into secluded inlets and coves the larger ships will never see or explore, it’s the perfect ship to explore the area. The yacht has a ratio of 2:1 crew to passengers on the ship and we were constantly amazed at how the crew was always concerned with making sure we were all comfortable.

Our cozy stateroom on the lower deck was small but designed for maximum organization; it was also surprisingly comfortable. The sun lounge on the top deck of the ship became the most popular location on our cruise as we enjoyed the warm, sunny days of early spring. There were kayaks neatly stored on the top deck, along with the skiff, which was used for excursions to view the local scenery and wildlife, and a roomy hot tub. The salon with comfortable furniture and an open bar was the gathering place in the evenings as everyone congregated to discuss the adventures of the day.

With a true open bridge policy, the Safari Quest even had a bench in the bridge area for passengers to sit on. The captain was always very welcoming, explaining everything from where we were headed to what wildlife we could expect to 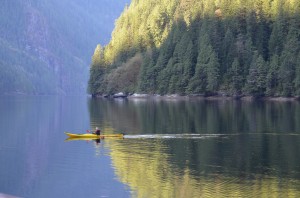 see. Every evening, after a long day of kayaking, taking out the skiff, hiking, and exploring, we gathered in the dining room for one incomparable dinner after another. The chef and pastry chef did a great job with all the meals and we enjoyed every single one of them. In fact, we were never allowed to go hungry on the ship; in addition to three full meals, we had delicious appetizers every night before dinner, and every time we arrived back from one of our adventures we had some interesting food and drink waiting for us.

The islands are a boater’s paradise with warm water for swimming, snorkeling, kayaking, fishing, and observing wildlife. One of the most beautiful places we visited was the incomparable Princess Louisa Inlet. As we 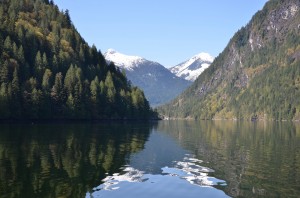 approached the Skookumchuch Rapids which line the entrance of the channel, the Safari Quest yacht paused long enough to disgorge a skiff for those adventurers in the group who wanted to brave the rapids for photos. Hardy kayakers were riding the rapids and shouting with excitement as the waves threatened to capsize their vessels. The surrounding, soaring mountains watched placidly as they had watched the people of the Sechelt First Nations traverse these same rapids hundreds of years before.

But when you are gunkholing, it’s the quiet you notice first; even before you perceive the sounds of the lush growth of dark green evergreen trees, the granite slopes scoured by glaciers, the snow topped mountains, and the gushing waterfalls of these amazing islands, the stillness of the land is the first thing you’ll observe.

We headed into the Jervis Inlet (which leads to the Princess Louisa Inlet), gliding along on the dark green water that was smooth as molten metal. The water was so still that the reflections of the surrounding mountains, left behind when glaciers scoured their way through the countryside millions of years ago, were clearly reflected in the water almost like an underwater world of duplicate mountains. 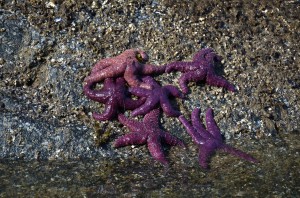 As we cruised past, harbor seals and river otters floated by, poking their heads up to gaze at us inquisitively while they lounged unafraid and unabashedly lazy in the warm sun. A bald eagle soared above us in the cloudless, dark blue sky, checking out these intruders in his domain as we neared the end of the channel and anchored.

Later, we explored the inlet in our small skiff and found dark purple starfish clustered everywhere, both under and above the water, clinging to the rocks. We kayaked the still water, gawking at the waterfalls tumbling down the mountain walls lining the inlet.

We had an amazing experience with a pod of orcas on another day of our cruise. Watching the orcas, we realized they had trapped a lone sea lion who had ventured too far from the local colony. They played a deadly game with him, circling him in a trap to teach the youngest orca how to hunt and kill. After about an hour, the orcas tired of their game and began to smash down on the sea-lion, crushing him down under the water again and again with their tails and their huge bodies. This is how killer whales feed: they pummel and crush their prey until it is unconscious, then tear it to pieces underwater. Finally, there was huge splash as the largest orca came down on top of the sea-lion and bore him down beneath the water. For a few minutes, there was complete silence. From the calm appearance of the water and the sun shining out of a cloudless blue sky, you would never have known that deep under the water, the sea-lion was dying. Finally, the orcas appeared once more with the dead sea-lion in pieces in their jaws. They swam away from our yacht and disappeared 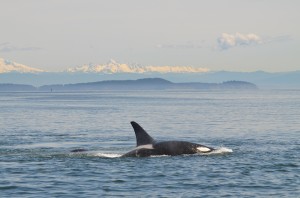 underwater, leaving us stunned and amazed at the sight.

From the quiet inlet to this astonishing display of nature and all the adventures in between, we enjoyed everything about our gunkholing adventure. For the ideal way to see these unspoiled and quiet islands, put gunkholing in your vocabulary – and try it for your next trip!

For twenty years, I worked as a librarian in an elementary school but finally decided to get serious about travel writing and devote all my time to it. Now, I travel the world and write all about it. I can't imagine a more fabulous or fulfilling job. I write a regular travel column for two regional, Central Kentucky magazines and contribute regularly to other magazines and online travel sites, such as The SavvyGal, A Luxury Travel Blog and The Vacation Gals. I'm an avid reader and stay active with Yoga, Pilates and Zumba classes. My favorite place in the whole world is a beach - any beach. I have been married for 34 years and my husband is my favorite travel companion. I also rely on him for his excellent photography skills. We have two grown children and the best grandson in the world. Slowly but surely, we are visiting all the places we have dreamed about. Hopefully, the next one will be the one you want to read about!