I arrived at Parambikulam, a government run Tiger Reserve in Kerala, and paid Rs300 to gain access, Rs70 for the car, plus another Rs300 for my camera. At the main office, where I’m to book in for the night, I’m told I need to pay tourist prices, not the fee I was quoted online – that’s for Indian citizens. So I forked out Rs8,800 which, I was assured would give me two great safari experiences. 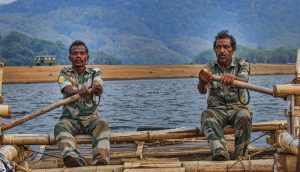 Okay, so the accommodations are beyond basic. In fact they’re on par with low-end camping, but it does have en-suite ablutions, complete with a bucket shower – which all looks a touch insalubrious. There’s a large electric fan in one corner of the bedroom, which contains two little rickety beds that had the warp and whiff of a thousand nights of lust ground into them. Thankfully there was a chair, in which I would prop myself up to sleep that night. With all meals and drinks included and two safaris for under £100/$145, nobody is being ripped off. So I convinced myself to look on the bright side and that it wasn’t all that bad. 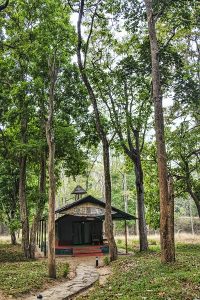 Along with nine others, my tent sits under the canopy of numerous indigenous trees, providing essential shade. I’m sitting on the veranda of my tent, the temperature is near 104F. The mozzies seem to like the damp facecloth placed around the back of my neck which helps keep cool and soothe the nylon burns caused by chaffing of my camera strap.

What is it with folk who live in hot climates – do they not feel the need to drink really cold beverages? I had hoped for at least a glass of cold water when I went to the dining hut, but instead was given room temperature water. When I asked for a tall glass of cold milk, with ice, I’m given something that comes out of a tin and made up with boiling water, poured into a glass and served with one ice cube on a plate. If alcohol had been on the menu I don’t know if I dared ask after a G&T, Lord only knows how that would turn out. Instead I asked for a Masala Chai and was told this was not available either – but regular Chai was. For crying out loud, no proper tea. In India!

It’s remarkable how much wildlife we have in the UK which we take for granted. Peacocks, deer, wild boar, hares, even wild chickens – each has a society especially set up to protect the breed. In India these same animals create much excitement; but show them a Gaur bull (India’s version of bisson and which I first dismissed as a large boulder, till it moved), a heard of elephant, or a troop of monkeys and they begin antagonising them by shouting and throwing sticks. Our guide spoke at length about the Reserve’s floral diversity and I’m certain we were introduced to all 1,320 species.

Parambikulam Tiger Reserve is home to some 400 families from several indigenous tribal communities whose livelihoods are wholly dependent on the forests of the Reserve. We stopped at one of their villages for a Masala Chai and watch tribal dancing at the village hall, followed by a brief bamboo rafting experience. 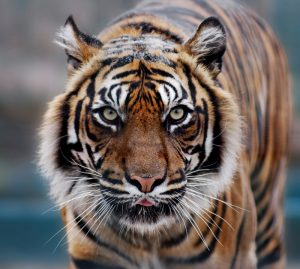 Now into the forth hour of the safari, it’s night-time. I had just about seen every creature living in the confines of the Tiger Reserve – leopard, wild dogs, Nilgiri Tahr (Ibex), elephants, Sambar-, Cheetal-, Mouse- and Barking-Deer, Giant Squirrel, King Cobra, freshwater Crocodile, Hornbills, Jungle Fowl, Peacocks… all barring the one I had set out to see – the elusive tiger – which, I believe there are 40 off somewhere within the Reserve’s 644 square kilometre borders. This I blame on the racket created by the ancient school-bus type safari vehicle we were being transported in. It was so appalling no manufacturer would put their name to it. It was propelled by a series of smoky black exhaust explosions. After grinding it’s gears and straining every metal sinew it would move ten feet, pause and then lurch another ten feet with the aid of a fresh explosion.

Proceeding down a rutted dirt track in a crab-like trajectory, excited chatter filled the bus – its passengers eager to find something else to throw a stick at. The guide gave me a look of hopeless resignation. 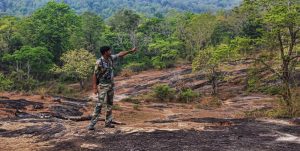 Whilst glumly thinking we had probably stirred the dinosaurs back to life someone shrieked – Tiger! Tiger! Tiger! This announcement had everyone excitedly rush to one side of the bus, causing it lean dangerously to starboard. All that was momentary visible of the tiger (which must have been hearing impaired) was its retreating rear end, swiftly followed by a hundred sticks.

I’ve yet to get more than two hours sleep a night out here and have come to the conclusion that India has an axe to grind with me. Call me paranoid if you will, but I find it near impossible to sleep when pieces of furniture move on the opposite side of the room in the middle of the night – and the only way to see what caused it to move is to switch the light on, which is outside the tent’s front door flap. Then there’s the rodent that fell into a tented sleeve between the sleeping quarters and ablutions that screeched in panic and had me rushing from one side of the room to the other, momentarily forgetting the creature that had toppled over the metal bin, in search of I don’t know what with which to aid the stricken rodent; and visiting the facilities at night creates a different kind of excitement as it has no ceiling, giving bugs and all sorts of other creatures’ access to the interiors. Oh, and not forgetting the peeping-tom owl watching me through the tented window.

Now at 4am, here I sit, bug eyed and freshly bucketed, ready for a dawn hike through misty valleys with my able guide, Manoj, who spoke of his team’s struggle to educate the locals and visitors about the environment. “It’s an ongoing challenge,” he said. “We don’t have the resources required, so we do what we can, with what we have.”

My narrow thinking pondered after the prioritization of funds sunk into the Indian government’s nuclear system and their space programme – all at the expense of just about everything else.

Following a dawn breakfast of spicy potatoes and pickles I’m off to Mumbai, where one night of nylon sheets and a 5am flight back to the UK awaits.

Previous ArticleMiami Arts and Culture: More than Sun and Sand
Next Article A Fantastic Fjord Detour Worth the Drive in Iceland
Cindy-Lou Dale

Fighting Ethnocentrism by Going to Europe: Travel as a Political Act with Rick Steves